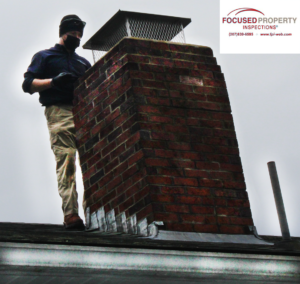 What is a Chimney Inspection?

A chimney inspection is broken up into different levels based on the depth of the inspection performed. We conduct a Level 1 chimney inspection with every general home inspection. A level 1 is a visual non-invasive review of the readily accessible portions of the chimney. A Level 2 chimney inspection covers everything in the level 1 as well as checks for compliance with National Fire Protection Association (N.F.P.A) 211 (Standard for Chimneys, Fireplaces, Vents, and Solid Fuel-burning Appliances) and utilizes specialized camera to view the flue to check for internal defects, damages, and build-ups of debris or creosote.

When should a Level 2 inspection be done?

The NFPA 211 states a level 2 inspection is to be conducted on all chimneys at the following times:

How long does a level 2 chimney inspection take?

You should plan 1.5-2 hours per chimney for a Level 2 inspection that is being inspected to allow for proper set-up, inspection, and clean-up. We encourage this inspection to be scheduled at the same time as your general inspection and we will have a second inspector there to perform the chimney inspection to ensure you have all the necessary information about the property in a timely manner.

Basics Parts of a Chimney

A chimney is a system of many parts that may change depending on the design and type of materials used, but there are some key parts that should be in every chimney.